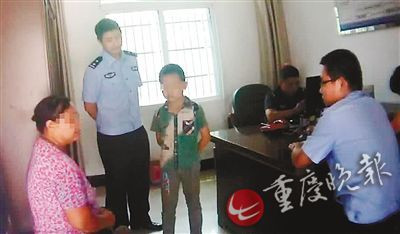 On the evening of 17, the Dazu District Public Security Bureau 110 command center received a old woman alarm: he was unprovoked insult, opposite party also to beat her, hope police arrived at the scene.

Gaoping police station immediately went to Tsing Lung Street to verify, played 10 times the phone, the boss was answered. I heard that the police arrived, the elderly home in a hurry hung up the phone, and then shut down.

Police asked residents and community cadres along the streets, did not find a fight fight. After verification number, the police learned that the man is aunt liu. To go to the police, only to see Aunt Liu's eating dinner, there is a boy in the play.

The investigation, Liu aunt alarm said to be reviled as purely fictional. On the afternoon of the same day, 8 year old grandson Xiaohua play arisenly. Her name is Xiaohua dinner, which know Xiaohua not only did not listen, but back talk don't let her tube. Aunt Liu to scare Xiaohua, then hit the 110 alarm.

Aunt Liu said, son and daughter were working outside, usually by her grandson. When the grandson she called two also listen, now don't listen, even contradict the elders.

Aunt Liu given false alarm without causing serious consequences, the police were criticized for its education. The second day, Aunt Liu came to the police station, the police to apologize and take the initiative to pay a guarantee, said no false alarm.