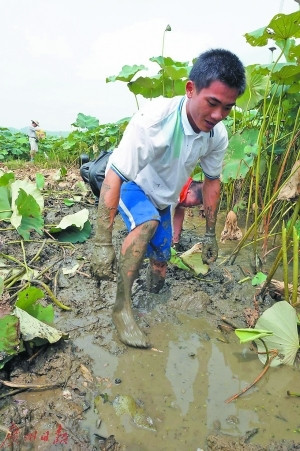 Yang Qingliang fumbled for the exact location of the lotus in the mud. Yesterday morning, Qujiang Shaoguan Ma Ba Zhen sun in the sky, under the temperature of 37 DEG C, semi dry pond hot water gas mixed with fishy wet moisture, taste some people smoked. A dark complexion, thin body of the barefoot boy into the mud, knelt in the mud between hand feeling, and then a lotus root from the mud hard to dig out, he was studded with bean big sweat on the face also reveals a sort of childishness.

In fact, this scene is often staged. Nearly 3 years of summer vacation, Shaoguan Qujiang junior middle schools Yang Qingliang are busy digging lotus seed lotus. Due to the untimely death of his father, insane mother, aunt and interpersonal communication obstacles of small aunt, over eight years late grandmother, Qing Liang Yang tender shoulders cannot unload the responsibility. He used the power of their own, struggling to maintain the family of five.

When I was 2 years old, my father died."

Qing Liang Yang's house is located in Shaoguan Qujiang District Ma Ba Zhen, a house built in a mud brick house in the 1970s put a bed with a few simple tables and chairs and planks together, this is the family of five possessions. Mud brick tile has been damaged more, a few rays of sunlight through the broken tile transparent plastic cloth cover, in some dim room lit the several beams, wall "outstanding League branch secretary", "the virtues of youth", "Miyoshi students", "outstanding student cadres", "the southern Guangdong juvenile and other large awards with light.

Although read this year 3, but Yang Qingliang is 18 years old, in my class for 3 years older. When it comes to this house, his face can not be crossed a few heavy. When I was 2 years old, my father died. The mother hit by this after all be scanty of words." Unexpectedly, it pours, a greater misfortune ensued. In memory of his young, that moment forever lingering -- 'home dog have been killed, my aunt pulled my mother find people argue. The two sides quarrel, the results of a stick hit my mother's head, when the blood came out, my mother on the way running back home."

After more than and 10 days in the hospital, the mother was discharged from the hospital, but the spirit of the trauma is more and more serious. She doesn't communicate with anyone, and often uncontrollably dancing, life is unable to care for themselves, the spirit completely insane.

Later, my mother with a small Qing Liang and elderly grandmother, two aunts living together. Two aunts are not married, aunt also suffers from mental illness, from time to time to attack. Aunt grumpy, it is difficult to properly communicate with people, "always feel someone against her, often of abuse".

From the memory of Yang Qingliang, he had to carry the burden of the life of the family. A young age, Yang Qingliang is cooking, washing, mountain wood cutting. The older, despite the long before he had high hoe, hoe unsteadily in the field.

There are several acres of land in the house, but the old grandmother and the three sisters are unable to cultivate. So just over the age of 10 Yang Qingliang began to study the village people, farming, sowing, seedling throwing, pyrethroid pesticide. In mature rice, alone harvesting, threshing and drying, the batch of several hundred pounds of rice from the field carry home.

So when their peers are still parents arms, young Yang Qingliang had become the home of pillar". Feel tired, feel that can not hold on, he secretly cried once; feel good to cry, he still do what you do. "After all, I am the only man in my family. I don't do that"

Tough day, let young Qing Liang Yang life "all rounders", he not only competent farm work, but also to repair the house, wiring. The people in the village has built a reinforced concrete building, his house or the ramshackle mud brick. This house is very easy to long time after a heavy rainstorm collapse and Qing Liang Yang bought cement, river sand and gravel, trying to will have holes in the ground to lay.

The tile roof has been broken, when it rains, the room is like a few taps, water straight down filling. So he bought the tiles to borrow bamboo ladder, the cat climbed up the roof to repair the tile surface. In remittent, unable to withstand the weight of a bamboo ladder snap, Qing Liang Yang heavily from about 4 meters high in the air fell down. "I feel like all the bones are broken up, and I can't get up and go back to my God."

"Once there was a time when my mother was at my door."

In tough times, the love of their loved ones is the only driving force for him to go on. Even though he had been mentally disturbed since he was young, he couldn't even remember what his mother had said to him. But Yang Qingliang always believed, "mom loves me."".

Most of the time, when the Qing Liang Yang exhausted back home and get ready for bed mother always keep silent in the door of his room for his vigil, she did not allow anyone to disturb. "Once there was a time when my mother was at my door." When he did his homework in the dim light, his mother's favorite thing to do is to sit next to him and watch him write and read. Although the mother and son did not communicate in any language, but in the eyes of the mother's silence, he felt the endless love and care.

He still remember every detail of your childhood: "at that time my mother to the mountain wood, I want to go with her not to let. I watched her walk away from the back, pretending to be the door of the door, and then cried aloud." Tearful eyes dim, he saw his mother threw down the electric shock like firewood knife ran, panting him tightly in the bosom. Although childhood memory had blurred, but this scene let him unforgettable The imprint is engraved on my heart..

"Sister, I no longer feel lonely."

From the description of my grandfather and uncle, the father's image also began to become plump up. "He did business from Meizhou to Qujiang, Shaoguan, and he became a home after he met his mother." Say, some to be suffused with red eyes Qing Liang Yang mouth slightly bent into an arc, he looked into the distance, it seems that the clear sky, a figure in his gaze, "Dad is very hard, it will do business, is the temper is bad and you love to drink......"

The appearance of uncle, but also bring a great surprise. "I never thought that I should have a big one, my one year old sister!" It turned out that after his father died, his sister was sent back to life in Meizhou. "Sister, I no longer feel lonely." Let him feel related by flesh and blood and sister feel after so many years. Now, as long as there is a chance, he will take seven or eight hours to go back to visit his grandfather, uncle and sister.

"Sell the lotus money, I brought my own part to go to school, the rest are left to grandma."

Speaking of lotus, Yang Qingliang is very proud of. 3 years ago, he found the lotus market price is relatively high, so the start of lotus root. There are a few abandoned pond village, every spring, a bunch of green lotus seedlings. Yang Qingliang went to the waist deep mud, lotus digging out from the mud, transplanted to their own home field.

A lotus and lotus root digging are very tired, because it has been bent down in the mud, one day. There is no other labor in the house, and the cold and summer holidays are the busiest time for Yang Qingliang. "The tireddest, I from 6 in the morning till the next morning 2 points, dug more than and 100 pounds of lotus root, are all exhausted." After more than three years of exploration and attempt, this year alone he was planting lotus has 3 acres of 4 points to, is expected to yield up to 3000 pounds. Coupled with the government to give the family 300 yuan per person per month subsistence allowances, which has basically been able to meet the needs of life.

Qing Liang Yang lotus lotus root to feed a child you spread after, touched countless Shaoguan people. Everyone called him "lotus baby". The morning of the 18th of this month, Shaoguan City Love Association organized the 10 enthusiastic people find Qing Liang Yang, all without demur roll up trouser legs jumped into the mud, to help him to dig up the lotus root. Shaoguan Cuisine Association and other units and hospitality enterprises, will be more than 3 thousand pounds of lotus sold separately.

According to the market price, 3000 pounds of lotus root can be sold for 1 yuan. Although the lotus is not sold, but this has been the plan of Yang Qingliang. This year has been the third graduate, he, did not pass the opponent on the left in front of the Qujiang a, Foshan a public high school is likely to be admitted he, which means that he will leave the grandmother and mother. He is very reluctant to sell: "Lotus money, I brought my own part to go to school, the rest are left to grandma."

When it comes to parting, he was somewhat at a loss, because Ruyuan Shaoguan middle school also admitted him, this school is more than and 60 kilometers away from home, need to pay tuition fees and living expenses, and all the cost of the school during the Foshan high school. For the future can not take care of his mother, he is very worried: my mother does not speak, I am very worried that she was bullied aunt."

Yang Qingliang's dream is to be a soldier or a policeman. But he also clearly knows that this is likely to always just a dream, I am 18 years old this year, I do not know there is no chance." But he always insisted: "no matter what the future, I will take my mother and grandmother in the side, do not let them suffer." (reporter correspondent Xie Xiujin Bu Yu)