﻿﻿ Xi Jinping wrote to the news: the party and the people trust journalists - Beijing time

Xi Jinping wrote to the news: the party and the people trust journalists - Beijing time 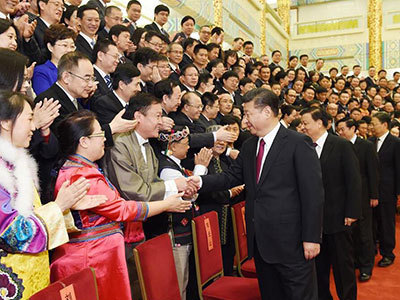 In November 7th, the party and state leaders Xi Jinping, Liu Yunshan and other officials of the Chinese National Association of journalists of all ninth Council representatives and China News Award, in the Great Hall of the people in Beijing Changjiang & Taofen prize winners on behalf of. Xinhua News Agency reporter Li Xueren photo

In the seventeenth China Reporter Day is approaching, the first meeting of the National Association of journalists of the ninth Council and China News Award, Yangtze Taofen awards will be held 7 days in beijing. General secretary of the CPC Central Committee, state president and chairman of the Central Military Commission, Xi Jinping, met with all the representatives of the Council and the winners, and delivered an important speech. He stressed that the party's good news public opinion work, create a good public opinion environment, is governing the country, regarded the event. The Party Central Committee attaches great importance to the news public opinion, put forward specific demands on the party's good news public opinion, we should implement the central major media and media at all levels do better more, make greater contributions to the party and the people, the party and the people trust journalists.

At 9:30 in the morning, Xi Jinping and other people came to the Great Hall of the golden hall, with the representatives shook hands and posed for pictures.

In the warm applause, Xi Jinping delivered an important speech. Xi Jinping hope that this meeting is a unity conference meeting to further unify their thinking, enhance understanding, promote the work of.

Xi Jinping pointed out that the party's news media work is an important part of the work of the party. In the construction of revolutionary reform in various historical periods, the news public opinion front and the party and the people with breathing, with the times progress, and actively promote the party's claim, deeply reflect the voice of the masses, actively carry out decision-making research, played a very important role.

Xi Jinping stressed that the party's eighteen since the news public opinion front conscientiously implement the Party Central Committee's decision to deploy and work requirements, highlighting the spirit of the party's eighteen and eighteen third, fourth, fifth, the six plenary session, reflect the advance of "five in one" and the overall layout of "four comprehensive" strategy progress results, in-depth the propaganda of the cadres and masses of unity and struggle spirit, sing the main theme, spread positive energy, effectively stimulate the whole Party and people of all nationalities unity and struggle with confidence and strength. The majority of journalists bear responsibility, be enthusiastic and press on with wisdom, sweat, and life has made important contributions to the party's journalism. Practice has proved that our news team is a reliable, high quality, hard fighting team, Comrades work very hard, very effective, the party and the people thank you.

Xi Jinping pointed out that the leadership of the party is China groups of people, is the bridge between the government and the press. I hope Chinese's efforts to maintain and enhance the political, advanced, mass, better put the majority of journalists together, really become a reporter's home".

Liu Yunshan attended the meeting, and on behalf of the CPC Central Committee. He said, the general secretary Xi Jinping met with comrade attending the meeting and delivered an important speech, fully affirmed the important role of the journalists play in the service of the party and the country's development, the news public opinion work put forward and hope, fully embodies the CPC Central Committee on the press front attention and loving care, we must seriously study and implement the good.

Liu Yunshan pointed out that the front press to further study and implementation of the party's the sixth Plenary Session of the 18th CPC Central Committee spirit, in-depth study and implementation of general secretary Xi Jinping series of important speech, firmly safeguard the authority of the Party Central Committee with Comrade Xi Jinping as the core, consciously ideological and political action on the Party Central Committee with Comrade Xi Jinping as the core of the highly consistent, earnestly implement the news public opinion work responsibilities mission, in order to promote the great cause, the construction of the great project, win victory to provide strong support for public opinion. We must adhere to the correct political direction and guidance of public opinion, adhere to the principles, and establish a people-centered job oriented, promote the theme, spread positive energy, the spirit of reform and innovation to improve the level of public opinion guidance, to promote the overall development of the overall layout and coordination in promoting "the four overall strategic layout to create a good atmosphere for public opinion. To adhere to social responsibility, take the lead in practicing the socialist core values, always putting social benefits first, seriously consider news social effect, better play an important role in the wind of the news public opinion. To implement a comprehensive strict requirements, strengthen the construction of the party's news unit, press public opinion front leadership and cadres stronger. Chinese journalists should strengthen the journalism ideological and political guidance, to deepen Marx's concept of news education and activities to enhance the ability of go turn change, contact the service of journalists, journalists and promote organizational reform, grasp the association to organize the self construction, to better promote the development and progress of the party's news.

The meeting, at the opening of the China acja President Tian Cong PCChips, Chinese Federation party secretary Zhao Shi sent a congratulatory message on behalf of the people's organizations. The meeting for the twenty-sixth session of the fourteenth session of the China News Award, Changjiang & Taofen prize winners represent awards.

The relevant departments of the central and state organs responsible comrades, the Chinese National Association of journalists of all ninth Council representatives and Chinese News Award, Yangtze Taofen award winners attended the event on behalf of.