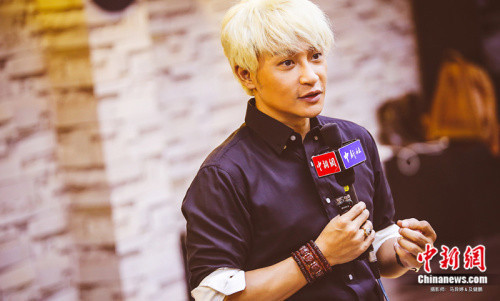 "I walked down the spotlight follow me or hit?" "The position of the station should be determined again." In Beijing the East Fourth Ring of a dance rehearsal hall, a blonde Chen Zhipeng is with his own Troupe for 22 new album song will rehearse. After determining that the each part of the process in actors and again and again, he is willing to start accepting a reporter to interview. Do not worry told the actor "time don't play mobile phone back to the lines", the voice slightly hoarse.

Recently, after an absence of singer four years of Chen Zhipeng upcoming their latest album "he and her love", in the new album, in addition to the cooperation with the South Korean producer first four new single, will also "Red Dragonfly", "green apple paradise" the first four little tigers during the classic songs of the new adaptation. Banny Chen said with a smile, with 4 song "childhood" song, because each stage can represent my mood. "In fact, to sing these songs and the mood at that time was very different." Chen Zhipeng, frankly, tigers during their only seventeen years old, was very hard to finish the song, three people sing neat is good, to sing the songs, the past and present mood seems to have a staggered. "Re arranged after it is no longer sing, but very carefully put some in the mood. Sing a word some emotions, also want to show the fans that mood swings."

In 2015 the drama "placed", Chen Zhipeng first fought behind the scenes featuring the director, is also chairman of the actor, producer, fashion design and multiple identities. And in the first concert of the choreography, he also wanted to show the audience musical performances. Rehearsals, he not only of their scenes with ease, but also skilled in the back take the opera actress lines, a pair of "commander in chief" posture. Banny Chen self review, "actually I do behind the scenes becomes a bit long winded, will be particularly fierce."

Although only in the role of the director of small scale chopper, Chen Zhipeng, did the director again reflection actor, most likely to commit errors is like clutching scripts to read the script. "I just called an actor don't look at the phone, because her cell phone lines, take away the script, have to put (role) want to say the words with their own mood to play out."

Shortly before, in Chen Zhipeng Beijing personal concert, little tigers Alec surprise appeared, at the scene only to hear "Red Dragonfly" when the eyes suffused with tears, more specially prepared cake came to Chen Zhipeng birthday, the little tigers fans see this scene can not help but moved. Chen Zhipeng said, "because we usually work very busy, can have such an exchange of reunion feeling good, following several cities, I believe that fate will meet again."

As a youth idol's debut, Banny Chen expressed concern nowadays idol group TFBOYS. "My niece was 8 years old, two years ago are still singing my song, after the 7 year old will start their song." He also to the juvenile period have stepped into the entertainment circle "little meat suggested," to complete their assignments and then let go to do the things you like to apply what they have learned, is necessary for life. "

"In the face of the feelings I feel like a little child, energetic, attitude is very direct, so I couldn't find people to share with everyone." In Banny Chen's new album, tells the love song is not in a few, and his personal emotional state has also been the concern of the outside world. He said the truth does not value the appearance, looking forward to the other half is to understand their own ordinary people, with their own too close to work but not too good.

Starred together with Chen Zhipeng "Huanzhugege" our recently announced marriage hearing, he also sent his best wishes meet must give heart like a big hug, because she is a man of character, I wish she and Jianhua happiness sweet. " For users looking the "Princess" who can "fit" at the wedding? Banny Chen bluntly, "gather together so many people? Very difficult."