Since he retired married into the family, Guo Jingjing and Kenneth Fok's life has been the focus of attention of the outside world. However, there is no imagination in the luxury publicity, the couple left the impression that the outside world is always low-key, simple. Recently, two people for performance in a variety show and powder in a large area of the circle, in feeling to two bean love at the same time, some popular in network news. For example: "Guo Jingjing put 5 cents rope to attend formal occasions", Fok personally buy food to move "has been re turned out. Recently, two people generous response to the rumors on the Internet, Guo Jingjing more domineering said: "Scrunchie 3 dollars, you can't force someone to sell 300?" 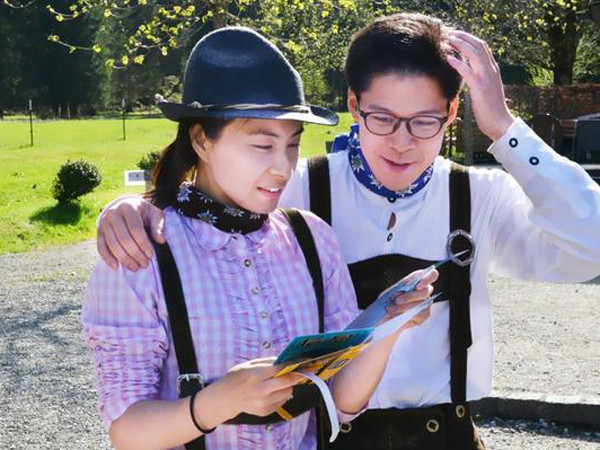 In early 2013, the media have reported that Guo Jingjing and Kenneth Fok in order to avoid the dispute moved away from the storm produced Huo mansion. Reported that two people moved from the day after the sad, because there is no domestic helper, anything to hands-on: supermarket Huoqi just to get the dishes to carry rice, Guo Jingjing is responsible for carrying toilet paper and paper diapers and other daily necessities, related pictures is popular network, cited many netizens exclamation: "Hao behind the door is full of bitterness."

What is the fact that the fact is, in an interview, Kenneth Fok responded, said: as we see online, I do not know why, for example, we go to the supermarket, it seems like a very big thing. We go to the supermarket to buy food to buy rice to buy milk, online comments are very surprised." Kenneth Fok said he did not think to buy food, carry rice is a very special thing: I graduated from primary school on the 12 year old went to the UK, in the UK, their own life. Whether it is washing clothes, changing the quilt, are themselves out of the exercise. I also developed a habit, for example, to the supermarket, I like to pick their own, always do not rest assured that others do. For example, carrying luggage, they may be lost if they move, or how, so they move their own mind at ease a little." And Guo Jingjing also said he was a young man into the diving team to learn life: "their own things are done by themselves, or no one to help you." Kenneth Fok think, to go to the supermarket, moving things are no longer normal things, there is no special place.

As a former Olympic champion, now Huo's wife, Guo Jingjing's every move can always cause people's attention. Because of the family's sake, Guo Jingjing dress will inevitably be outside to enlarge. The most popular Terrier, was her last year wearing 5 cents plastic ring to attend formal activities.

Mention of the stem of 50 cents to scrunch, Guo Jingjing upright to response said: "not all the people are using this thing? I don't know that there is something special." During the interview, she wears the ring in his hand, for example: "this people sell dollars, you can't force someone to sell 300 bucks? The problem is I don't get this, I use what ah?" and Kenneth FOK also said that oneself like Guo Jingjing plain: "to tell you the truth, whether it is what identity, the players or, married to now have a family, she is like a day."

Although life is outside naturally or half unconsciously "demonizing", but Guo Jingjing is not affected. "Maybe a lot of people think that when she moved to Hongkong, she became a housewife. But in fact there is no ah, as usual life." Kenneth Fok said, we are anyway so many years, or live their own lives, do not say that you do not like to go to the supermarket do not go to the supermarket. No, I don't think so, I feel very good."