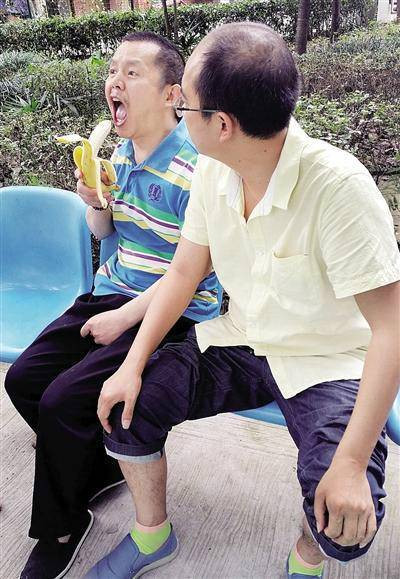 Xu had students from the nursing home to visit him. "Ah, hey hey......" 42 year old Xu was ambiguously shouted, took the old father to pass the banana, like a child straight into his mouth. A few days ago, when the students went to see Xu, saw this scene, red eyes.

Xu was the Yongchuan double stone town, seven years ago, suffering from cerebral obstruction caused by cerebellar infarction and couldn't walk by himself, incontinence, amnesia, intelligence level is in a 1 and a half years old children.

Headache for 4 years did not promptly check the treatment

77 year old mother Xu Zhongyu was still fresh in the memory of his illness. "In order to support the family he raise child, the beginning of 2006 the skull pain, pain for several years not to cure." Xu Zhongyu appears to be particularly regret, will wipe the tears and rub, blame us, at that time thought it was just a common cold!"

7 years ago, Xu had to leave Yongchuan to the main city of van, when his son Xiao Jiang (a pseudonym) was 6 years old. According to Xu Zhongyu memories, in order to let his wife and son to live a better life, worked particularly well, often do not attend to eat.

In 2010, Xu returned to his hometown in Yongchuan, the family was aware that he had some abnormalities. A small bucket of water, even once Xu was only 7 years old son can put up, but had not been able to do. Home people panic, forcing him to go to the hospital for examination, was diagnosed with a brain atrophy, cerebellar infarction.

A disease, so that Xu's life has changed a lot. Not only resigned from the job before the break of the economic source, the wife also quickly filed for divorce.

Slowly amnesia did not recognize laofulaomu

Xu fourth had at home, there are 3 brothers, the following are 1 sisters. Parents love dearly son, in the early days of illness, he received the side of care.

Once Xu father Ceng Guide, this year has 86 years old the, in his eyes, had Xu now no matter how Daisha clumsy, is also the year that had made him proud, his beloved son.

In the care of Xu's 2 years, he watched his son become a day to recognize their own. "At the beginning of the time also known to call my father, and later on the day one day, walking are not stable, then can not say that people do not recognize the."

From 2010 to 2012, Xu was from the first weakness in the limbs and walking instability, then later obviously Daisha, incontinence. Two old man to take care of the increasing difficulty, the 3 brothers will be sent to the nursing home.

Xu Zhongyu and Ceng Guide will go to the nursing home to visit once empty. Not long ago, Xu Zhongyu visited after Xu said to him: "son, my mother had a period of time to see you, you are here to be a good person." Xu flew up red face, struggling to stand up from the chair, say no words, but in the eyes of the helpless. This scene, let Xu Zhongyu burst into tears. 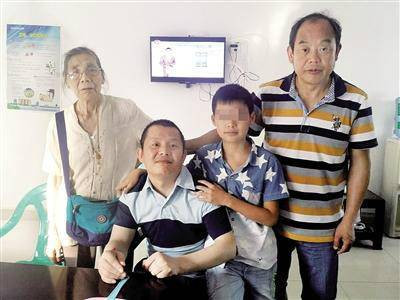 Ceng Xu (in) with his family. His child was admitted to a key middle school.

Xiaojiang some introverted, quiet, but very sensible, everyone in the family love him very much. When asked about his father had lost some of Xu, Xiaojiang will appear.

Granny Xu Zhongyu said Xiaojiang when knew father and other people is not the same, after once Xu was sent to a nursing home, he often clamor to find my father.

"Although he is very much like his father, but he did not dare a person to go to the nursing home to see." Xu Zhongyu said, grandson of his father is afraid of love and fear.

Two old people in order to save money, cook usually only make a dish. The grandson thought the body is long, sometimes a stove for him.

But Xiaojiang usually will be good food in grandma and grandpa in the bowl, "he knew that in order to save money to treat his father and never complained." Xu Zhongyu sighed. 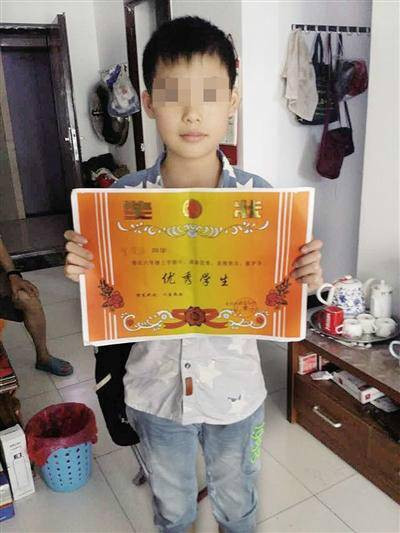 Xu's son, a good result, is the pride of the family. A group of students want to help him through the difficulties

Xu was now living in a nursing home, people need to take care of individual workers, the monthly fee of 2300 yuan for medical expenses. In order to save money, can reduce the drugs are reduced.

Once Xu now has about 400 yuan per month subsistence allowances, 800 yuan a year two disability grants, count down, the income of less than 500 yuan per month. Zeng Xu surplus out of 1800 yuan per month to spend, by his 3 family of ordinary brother. "A few years, and Xu's money is they give, really is a good child." Xu's father had a few sons between the hand and foot feeling, very moving.

Had Xu Shiyong fourth grade 91 students, in 91 alumni party, people accidentally filed has Xu now, many people are said to be hardly worthy of belief. Some people think that Xu was in the class is a sports committee, is to discuss female students like.

In July 6th, a group of old students pick up Xu's parents to the nursing home, to visit Zeng xu.

"Many of my classmates are crying." Zeng Xu mother Xu Zhongyu said, see Xu had now become like this, there are many students feel very sad.