Even in the hot summer days, people will suddenly catch a cold, according to the Korea Journal. After suffering from a cold, cough because the mucus will eat a lot of suffering. Then to introduce the simple application of acupressure effectively "".

When the nose is blocked or runny nose when you can try pressing Yingxiang acupoint. Yingxiang acupoint is the nose on both sides of the following acupuncture points, two index finger gently press the three minutes or so will be able to alleviate symptoms of runny nose, and sinusitis. The body vein aggregation of Baihui acupoint can relieve headaches. Is located in the center of the head, is the intersection of ears straight up and brow line center to the connection. With his head in his hands, the left thumb pressing baihui. 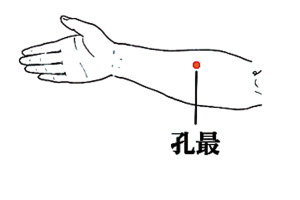 A severe cough when you can rub the wrist to elbow at 5/9 Kongzui point. Pressing hole the most points can also improve the symptoms of chest tightness. Severe fever try press Dazhui point, Dazhui in forward down the most prominent bones below, for detoxification have the effect very much. It is very useful in phlegm pressing the middle knee and ankle joint lateral part of the Fenglong will.

In addition to cold effect of acupressure and pressing fengchi. Fengchi in central both sides about 1.5 cm from the back of the neck.