﻿﻿ Chinese soldiers to Russia to participate in the international contest of &quot; &quot; the battle of the most absorbing eye

Core tip: organizational commitment, this year's tanks of the two games will be more than last year's ornamental, for this special transformation of the more complex barriers. Last year, the Chinese team won the runner up, this year will undoubtedly be the hottest.

Russian media said the tanks from China will participate in the international military competition in the outskirts of Moscow A Rabinow tanks two modern.

According to the Russian Red Star television website reported in July 20th, to Russia to participate in the international military competition in the Chinese team was warmly welcomed, Chinese tanks and the Russian T-72 tanks in the game to compete.

Reported that this year the Chinese team will once again send 96 tanks. This tank is the main tank of the people's Liberation Army of China. But this year's tanks and last year's competition is not exactly the same, despite the subtle differences in appearance only experts can tell.

Yevgeny Poplavsky, the main referee of the two modern tanks, said: "there is a difference in the appearance of the turret and the chassis of the tank."

The organization's commitment to this year's tanks of the modern two games more than last year to watch, for this special transformation of the more complex barriers. Last year, the Chinese team won the runner up, this year will undoubtedly be the hottest.

On the other, according to Itar Tass News Agency reported on July 20, the Russian Central military commander assistant Jaroslav Roschupkin 20 to the reporter said, Scouts of China has arrived in Novosibirsk, ready to participate in the 2016 International Military game "military scout model contest.

Roshchupkin said: "the tournament will be held from July 30th to August 6th. We were going to China scouts with Russian meal." 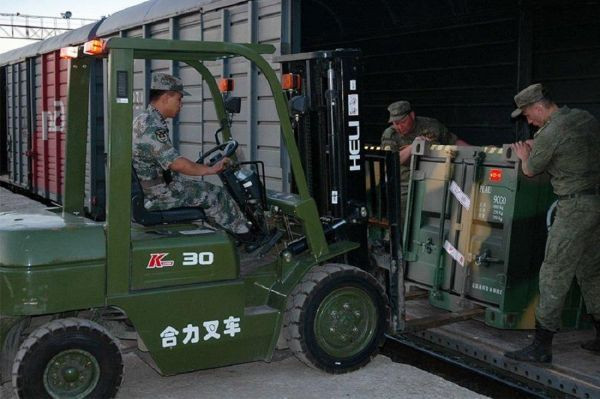 The equipment on the PLA delegation at russia. For Russian soldiers from the train unloading equipment in china. (Russian satellite network)