﻿﻿ Texas by the new law students can gun class

Texas by the new law students can gun class 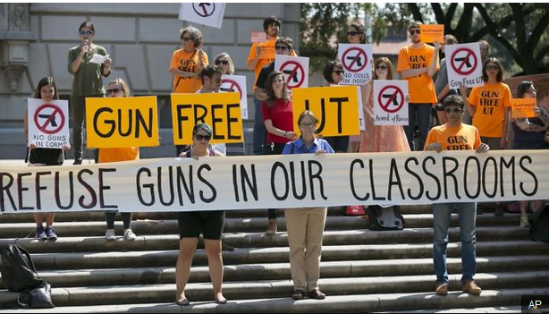 On the day of last year's Parliamentary Assembly, some of the students' bodies rallied against the adoption of the legislation.

According to the British Broadcasting Corporation reported on August 2, Texas recently passed the a law, allowing college students to carry the "hidden" guns, to enter the University. Previously, Texas has been part of the university students allowed to enter the campus armed.

According to the new law, 21 years of age or older students can get a handgun permit, the permit allowed him to can carry a gun into the classroom, TexasHas now become one of the eight states in the United States to allow students to carry guns into college campuses.Many higher education officials and students fear that the law may affect the willingness of students to go to school.But supporters of the law say it is "crucial" to defend the Constitution and to defend the rights of the constitution.Republicans in Texas say the law could stop the future of the shooting.

It is understood that in 1966 a massacre is by ex marine Charles Whitman 25 manufacturing of, he was carrying a gun into the campus and killed more than 40 people in the gun.This is the first time in the United States University shooting and the first televised shooting cases. Whitman was shot dead by police after a 90 minute standoff.

Some scholars believe that the law will also lead to freedom of speech, because of with gun students can make a group of authority, thereby inhibiting open communication.Although some areas, including sports venues and chemical laboratories, are prohibited from carrying guns, the law allows students to obtain firearms permits to carry concealed weapons into other facilities at the University.