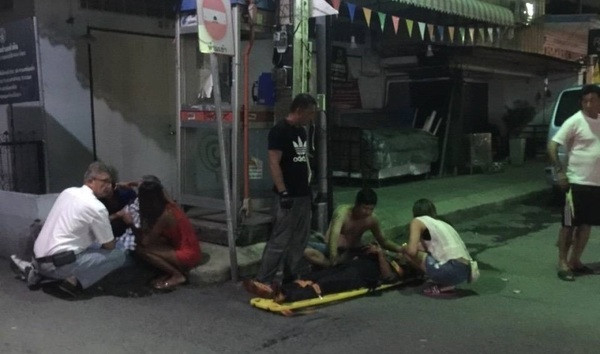 Night from August 11 to 12 in the morning, Thailand again terrorist invasion. Within 24 hours of 8 house appear explosion or fire. Thailand's "national newspaper" website reported on the 12th, said Thai Chakundip Chaikinda director general of police day, since August 7th referendum on the new draft constitution, Thailand 7 palace occurred with improvised explosive device and combustion bomb attacks. Guess gold said the explosive device and Thailand rebels used similar, but cannot conclude they did. He personally believes that attacks with the referendum, because their attacks may take place in support of the new draft constitution of government. "Dissidents may do so, to undermine the country's image and harm tourism.

"This is destroying our business. Hotels, restaurants, tourism, we have been suffering, but that would have killed us." Thailand tour guide Decha pan ya say tourism to terrorists strongly condemned. According to The Associated Press, the local people said that the explosion will make the local tourism industry as a key source of income by the impact of the impact of the explosion. The United States, Germany, Australia, Britain, Russia, Japan and other countries have suggested that their citizens to travel to Thailand, or as far as possible to stay in Thailand to avoid going out. 12 U.S. Embassy issued a message to the U.S. civil security information, said the Thailand officials confirmed that no U.S. citizens were injured". 12, the German Foreign Ministry confirmed that 3 Germans were injured in the attack, and said that Thailand may also be a new attack". The website of the Chinese Embassy in Thailand 12 also released information, remind in Thai Chinese citizens concerned about the local security situation, strengthening the safety precautions to avoid going to crowded places, and stressed that "the reminder is valid from today onwards to August 26, effective". Chinese ambassador to Thailand the consulate also leave emergency telephone (Paul led the embassy telephone 085-483-3327, Consulate General in Khon Kaen, leading insurance telephone 080-936-6070, Consulate General in Chiang Mai to consular protection telephone 081-882-3283. In Song card Consulate General brought Paul Tel: 081-766-5560).

The Associated Press reported that the timing and scope of the attack from the attack, the bomb was detonated by the opposition opposition to the government of the Thailand army. Last week, the latter has been criticized for a number of people in the next few years will be encouraged to contribute to the military power of the constitutional referendum activities. These explosions seem to be aimed at fighting the tourism industry, which is important for the government of Thailand. In August last year, Thailand, Bangkok 17 / 8 four Buddha bombings, killing 20 people were killed, of which 7 are Chinese citizens. The terrorist attacks on the image of Thailand's security has been a negative impact, and Friday's bombing of Thailand tourism industry has suffered a new blow". Tourism accounts for about 10% of Thailand's gross domestic product. Since Thailand's military coup in 2014, Thailand's economy has been in recession, but the tourism industry is still one of the few bright spots. Among them, this year the reception of visitors has more than 14 million passengers, while the same period last year for 12 million 500 thousand people. Thailand National Tourism Administration 12, suggested that the Thai tourists set aside enough time to avoid traffic congestion caused by the recent holiday in Thailand, while reminding visitors through various channels to understand the real situation in Thailand.

Agence France-Presse quoted the Prime Minister of Thailand, Pakistan education, said: these bombs intended to lead to confusion, so that people confused. We should not make people more afraid. When our country is moving towards a stable and better development of the economy and tourism industry, why the explosion?" The Bangkok Post "website report mentioned that accused usually alluding to the former Thai Prime Minister Thaksin supporters the bomb attack, Friday's bomb in anti Thaksin's area and a bomb has exploded in the house are in after the referendum on the new draft constitution votes accounted for the majority. Supachai, chairman of the Thailand Election Commission in August 10th formally announced the results of the referendum in August 7th, the new draft constitution and additional issues were 61.35% and 58.07% of the support rate was passed. Thailand's new constitution from the date of the draft will be accompanied by controversy, the focus of the dispute focus on the terms of the terms of the military power. Military government believes that the new constitution will help to overcome the long-term political ills, maintaining the overall stability. However, many opponents believe that the new constitution will weaken the power of political parties, is conducive to the military to continue to control the political power. Electric in 12 reported that the situation in Thailand quoted, director of the Institute of security and international studies at Thailand's Chulalongkorn University next Su Dirac as saying: "I think this is related to the domestic politics, anti regime groups want to spread a message, that is, they do not like the results of the referendum." Source: WeChat public number