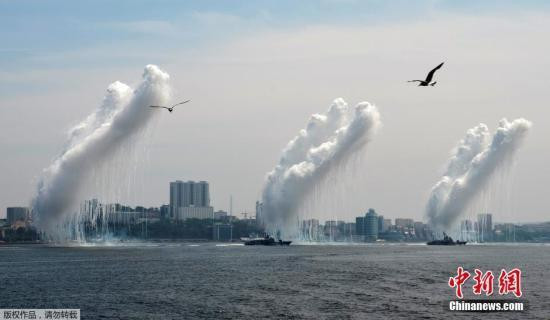 Beijing, August, according to foreign media reports, the relationship between Ukraine and Russia in the new tense occasion, the Russian military announced that it has deployed the most advanced S-400 air defense missile system in Crimea.

Russia's southern military region issued a statement saying that Crimea's troops have received the S-400 air defense missile system. The system can be 300 target tracking, and shot down 400 km range missile and aircraft, the Russians had also in Syria deployed with a set of air defense system.

Russian media reported that the missile system was decided last month to provide troops stationed in Crimea. Moscow also announced that it will be held next week to respond to the simulation of weapons of mass destruction.

Russia recently accused Ukraine of armed invasion of Crimea, causing tensions. Ukraine's special envoy to the United Nations asked Russia to provide evidence of this reference, and said Russia in Ukraine and Crimea border build-up of about 40 thousand troops.

Russian envoy to the United Nations on the Security Council on the alleged invasion of Ukraine, expressed concern and indignation".

The government of Ukraine has announced that it is strengthening its military security on the eastern border of Crimea.

The Russian Federal Security Bureau recently accused Ukraine weekend twice tried to armed invasion of the Crimea, resulting in the death of a Russian soldiers and Security Bureau officers.

Russia says it has arrested a suspect, also shows a number of explosives, grenades and other weapons.

Ukraine's Defense Ministry denied Russia's allegations that they did not have an active duty military or intelligence officer arrested.

Analysis refers to the Ukraine and the pro Russian elements between sporadic outbreaks of military conflict, does not exclude the Russia and Ukraine while the busy with the presidential election, the British off European technical problems and escalate its provocations.

Ukraine is about to celebrate the 25 anniversary of independence in August 24th, Russia is about to hold parliamentary elections in September 18th, Russia and Ukraine both countries accused each other causing instability.