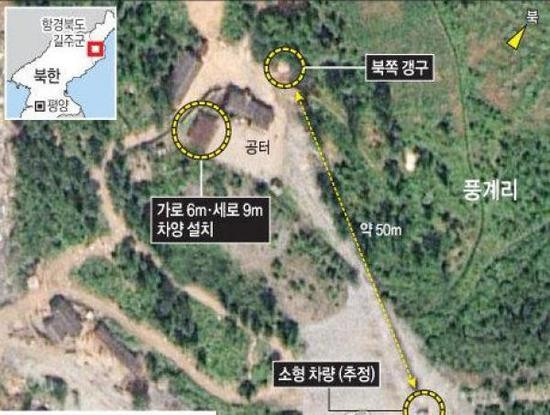 Feng River nuclear test field on the north side of the tunnel entrance to the South and southeast side, seemingly pic objects piled up, according to the satellite photo taken on August 4, the report said. The picture is different from July, not observed in small cars, nearby buildings were covered by a large tent, presumably intended to be.

38North said it is unclear nuclear test site in north tunnel entrance around why the accumulation of a large number of materials. July 11, 38North has pointed out Fenxi north of the entrance tunnel vehicle activity is frequent, does not exclude the Korean for the possibility of a nuclear test.

Previously, the United States 38north website, Japan's Kyodo news and other media are revealed, North Korea recently Feng River nuclear test base activity is frequent, observation equipment is being installed. North Korea is likely to carry out its fifth nuclear test in the near future. South Korea's Unification Ministry last month also said that North Korea has been in a state of readiness to conduct nuclear tests.